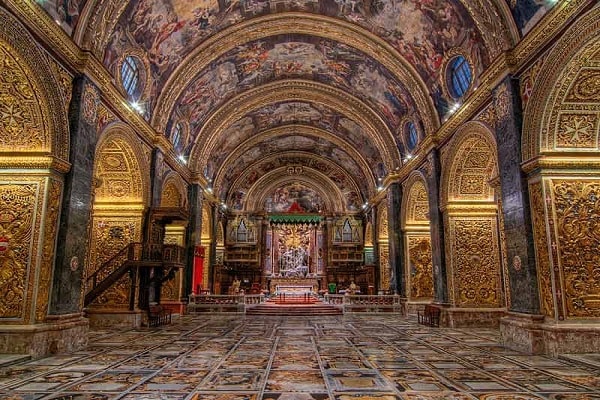 According to tradition, St. Paul's Cathedral stands on the traditional site of the home of St Publius, father of the governor of the island at the time that St Paul was shipwrecked in Malta. St Paul is said to have healed Publius who converted toChristianity and went on to become the bishop of Malta and later of Athens. The Cathedral of St. Paul was built from 1697 to 1702 to replace a Norman cathedral dating back to the 13th century which can be seen in two of Matteo Perez d'Aleccio's frescos in the Grand Masters' Palace in Valletta. Since plans to rebuild the cathedral were already in hand at the time of the earthquake, and within less than 10 years it was rebuilt, reaching completion in 1702. Designed by architect Lorenzo Gafa, St. Paul's Cathedral is a fine structure whose façade impresses visitors as they emerge from Mdina’s narrow streets. The cathedral's magnificent dome, painted a traditional deep red dominates the skyline.  Lorenzo Gafa had already designed several churches in Malta and was at the height of his career when he was commissioned to rebuild Mdina’s cathedral. The perfectly proportioned façade and the powerful dome (by far his boldest and arguably the finest in Malta) make this the most impressive of all his churches. The work took just five years to complete and the new cathedral caused a significant redesign of medieval Mdina's city centre as several streets and houses were cleared to create an open square in front of the cathedral appropriate to the size and splendour of the church.